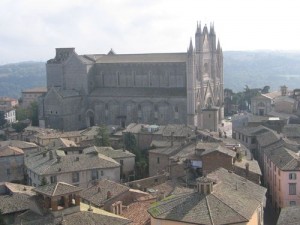 Orvieto, one of the most beautiful cities of Umbria and full of monuments, history and folklore. Lying on the impressive tufa rock that rises over the valley of the Paglia, was flourishing Etruscan and then Roman province, but in the Middle Ages,it became a powerful city to which they were subjected such a vast territory to arrive until today Orbetello (Tuscany) on the Tyrrhenian Sea.

Today, the city maintains,  the charm so that almost the whole of its surface can be considered historical center. Among its streets and squares stand many churches of every age and style (the most important San Giovenale, Sant’Andrea , San Francesco and San Domenico), majestic palaces like the Palazzo del Capitano del Popolo. But, obviously, is the Cathedral, Duomo (pictured left) the true symbol of the city of Orvieto with its beautiful facade of Maitani work is a wonderful example of elegance, grandeur and architectural harmony. Inside the cathedral there are the chapels of the Holy Corporal and San Brizio. 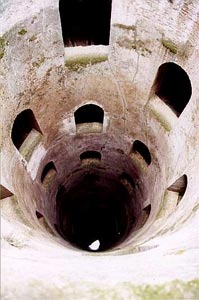 If the first is famous because it contains the reliquary with the sacred linen stained by the blood of Jesus (an event known as the Miracle of Bolsena, and the feast of Corpus Christi which was launched two years jubilee), the second chapel has beautiful frescoes Signorelli. Two other monuments not to be missed are the tower of the Moor and St. Patrick’s Well (pictured right). Also the history and archeology especially find space in Orvieto, Orvieto Underground’s visit, visiting archaeological sites are relevant, among them the Necropolis of the Crucifix of Tufo and Pozzo della Cava. These sites have unearthed Etruscan today exhibited in the museums of the city. Still on the subject of museums worth mentioning also that of ceramics and majolica medieval and the modern with the exhibition of bronze sculptures by Emilio Greek. Orvieto is a city rich in handicraft (wood, ceramics and lace in particular) and large events, including the major ones that the city offers every year: the feast of Corpus Christi with the historical procession, the manifestation of Umbria Jazz Winter ( end of the year), Orvieto Food Festival, Orvieto con Gusto. The latter are eno-gastronomical events also underline this important aspect of the city, because good food and local products of excellence such as wine and olive oil are another feature of Orvieto.

Some useful links to visit and discover Orvieto:

You can find out more about which cookies we are using or switch them off in settings.

This website uses cookies so that we can provide you with the best user experience possible. Cookie information is stored in your browser and performs functions such as recognising you when you return to our website and helping our team to understand which sections of the website you find most interesting and useful.

Strictly Necessary Cookie should be enabled at all times so that we can save your preferences for cookie settings.

If you disable this cookie, we will not be able to save your preferences. This means that every time you visit this website you will need to enable or disable cookies again.